The United in Prayer Forum Community

You hear the stories of the power of prayer. Live it! (1 John 5:14) We are a praying people around here who that we rely on God for our hope and our future. Talk to the Father!
Post Reply
10 posts • Page 1 of 1

Hello, many of us in Australia are needing rain again, pray for rain. We are blessed to still have lots of water in our tanks, but many are doing it tough. And the bush is getting dry in many parts of Australia and many are having nasty fires, so we need some decent rains.
Top

Nothing in all creation is hidden from God's sight. Everything is uncovered and laid bare before the eyes of Him to whom we must give account. Hebrew 4:13
Top

I've seen that in the news regarding the Syndey firework show.

Prayers going up, we've had some droughts ourselves over the past few years.
Top

Here's a bit of light during dark times from the Mallacoota fires.

Copied and pasted of from Facebook "Prayer of the Nations" fb page, but I heard this on the news this morning. Pretty amazing.

Wow! Here’s an ABC report this morning of an atheist’s change of heart during the fires in South East Australia. Read to the middle of his post where he saw God change the wind and save them.:

News Channel is chatting to David Geoffrey, the owner of the Wave Oasis bed and breakfast in Mallacoota.

Well, [conditions] are a hell of a lot better than they were. It doesn't look like it was midnight like it was just before. There's actually some light coming through the smoke. There's obviously dangers of spotting and the fires are running up in a northerly direction back towards the Princes Highway. I know that much. But before, it was... It was... Mate, you just don't want to go through something like this. It was terrifying.

And, um, I'm pretty... I'm a bit emotional still but I'm grateful that our animals are alive and that our guests that were with us are safe. We've stayed together. And, yeah, it was horrendous.

I want to give God the glory because, mate, I had a good friend, ex-firie, well, former head of fire department here in Mallacoota, Graham Clarke. He's been giving me the heads-up. He's in Canberra but is totally surrounded by fire where he was and was good enough to ring me and he said, "David, it's at the airport." So, I knew where it was. The airport in Mallacoota is five or seven minutes away in the car. I knew it was hitting town because the sirens start up.

At that point, I was praying. I was an atheist. I was praying to God, praying to Jesus, turn the wind. You wouldn't believe it - but I'm going to tell you the honest to God truth. It pushed this thing back against itself. Literally we felt the wind come from off the beach, it shouldn't have, but it did, but it went back at it. I don't care if anyone else doesn't recognise it. It was unbelievable. It stopped after five minutes and then probably 20 minutes after that, the breeze from the change south south-west, the south-westerly, it was blowing out to a gale for a point and then, what I thought - remember it's pitch black - and then the sky went red. We thought it was a fire front about to run over the top of us but what it was was, I believe, God's intervention, absolutely, through prayer, because it absolutely just burst its smoke and the redness was the sun coming through the smoke, not the fire about to destroy, you know, obliterate all of us down here. Because there's nothing they could have done if that had happened. It doesn't matter how many fire trucks you have.

Yeah. Look, um, because basically there's a rock wall [at the evacuation point on the beach]. So it's the only thing to protect from radiant heat, they wanted us to get into the water get against that wall. It's got oysters and stuff, not the greatest thing to do but it will save you from radiant heat, it's a barrier. So we were ready to jump in. And everyone was all along the edge, ready to go and of course when, you know, when that sky went red, it looked like what we've been looking at when we saw the fire coming.

Also, what I didn't say was you could actually hear it roaring towards town. You could actually hear it. I had been told that by Graham, the fire chief, he told me, "You'll hear it, David. You'll hear the sound." We've heard gas cylinders exploding, which means it's people's homes being destroyed and, yeah, look, we're just grateful to be alive.
Top

Praise You Jesus! Thank you Father for your mercy and amazing grace! Glory to God, Hallelujah!!! What an awesome testimony! Wow! I just thank Jesus that they were safe. We have been getting the after affect of the fires here. Haven't seen the sun for awhile, just gray covering the sun which peeps out sometimes. It's supposed to be summer but we are not seeing much of it, I believe, due to the dense covering of cloud manufactured by the fires in Aussie. Bless! I will be praying for them xox
Nothing in all creation is hidden from God's sight. Everything is uncovered and laid bare before the eyes of Him to whom we must give account. Hebrew 4:13
Top

Father, I pray that you will open the floodgates of heaven over the areas of Australia that are burning. Where lives, properties and people's livelihoods are being destroyed and that you will let it rain and rain and rain for 3 solid days Lord, that they and their properties may be saved from utter devastation. I ask this Father according to you mercy and your amazing grace, in Jesus Mighty Name!

Thank you Father!
Nothing in all creation is hidden from God's sight. Everything is uncovered and laid bare before the eyes of Him to whom we must give account. Hebrew 4:13
Top

Well thanks a lot for your prayers it's been raining for most of the day, it may not be heavy, but it was more than was originally forecasted for this day, I hope and pray it's hitting those fire affected areas too. It's topping up the water tanks though.

Shekinah wrote: ↑Thu Jan 02, 2020 6:27 pm Praise You Jesus! Thank you Father for your mercy and amazing grace! Glory to God, Hallelujah!!! What an awesome testimony! Wow! I just thank Jesus that they were safe. We have been getting the after affect of the fires here. Haven't seen the sun for awhile, just gray covering the sun which peeps out sometimes. It's supposed to be summer but we are not seeing much of it, I believe, due to the dense covering of cloud manufactured by the fires in Aussie. Bless! I will be praying for them xox

It's amazing how far the smoke travels, I saw on fb a pic of NZ glaciers turned brown because of the smoke.
Top

Where I live, the sky was yellow which made everything look sepia in color and the sun was red yesterday. It was an eerie feeling. It's much better today because the wind has parted some of those dark smoke clouds which allowed some sun to break through. We can also detect the smell of smoke wafting across the prevailing winds. It's windy here at the moment. Not our normal summer at all...https://www.tvnz.co.nz/one-news/new-zea ... tml?auto=0
Nothing in all creation is hidden from God's sight. Everything is uncovered and laid bare before the eyes of Him to whom we must give account. Hebrew 4:13
Top

I saw this satellite composite over at Zero Hedge: 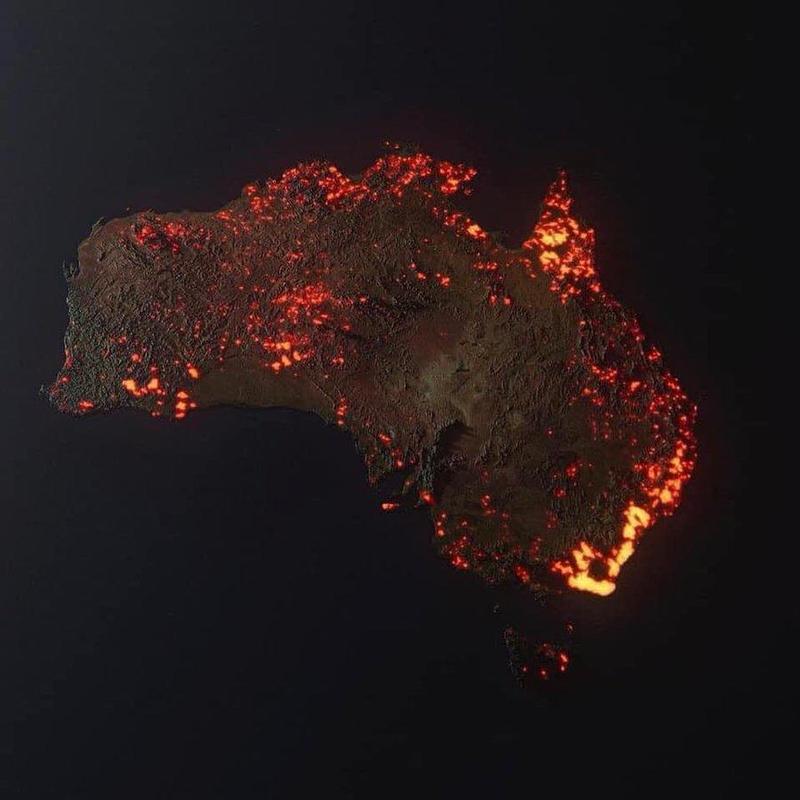 The reports are that there is so much smoke and heat that it's creating freakish weather. A fire truck was overturned due to winds created by what was basically a downdraft and dry thunderstorm. For lack of a better way to put it, the conditions seem pretty hellish there.

I've been near some fires before both in the mountains and down around the beach, but this makes those seem like mini campfires. It's literally like the continent is burning.
Top
Post Reply
10 posts • Page 1 of 1

Return to “The Prayer Forum”

Jump to
Powered by phpBB™ • Design by PlanetStyles